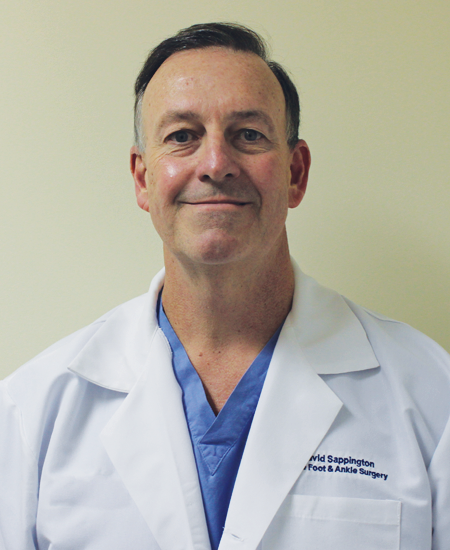 Dr. Sappington’s history is very unique to say the least. He grew up in Dallas, Texas playing high school football and baseball. After graduation, he started college and continued to strive for a baseball career. A common knee injury among sports players changed his entire future.

David had always felt the need to help people, so he decided law enforcement was his new direction. He was a police officer in the Dallas, Texas area for a total of 14 years. He met and protected many high profile individuals, including the President of the United States and the Queen of England to mention only two. He has numerous stories to tell, both scary and intense, as well as humorous.

One year on Christmas Eve, he worked a fatal car crash. He held a young woman in his arms as she took her final breath, he realized his true passion and began a new career in medicine.  This decision was further strengthened a few months later with a career-ending injury while being dragged by a vehicle with a murder suspect at the wheel. While working a special detail, Officer Sappington attempted to arrest a double murder suspect who was evading police in a high speeding chase. He was dragged several blocks by the suspect’s car before falling and sustaining severe injuries. After multiple surgeries and extensive rehabilitation, Officer Sappington fully recovered and began fulfilling his dream in medicine. David earned his B.S. in biology with a minor in Chemistry at the University of North Texas and received his podiatric degree (DPM) from Barry University School of Medical Science in southern Florida. He completed his residency in primary medicine, plastic surgery, extensive forefoot, rear foot and ankle surgery at the James A. Haley Veteran’s Administration in Tampa, Florida. During his time there, the James A. Haley Veteran’s Administration program was recognized as the busiest, the most difficult, and the most demanding hospital in the Federal Government’s Organization for American Veterans in the United States of America.

Dr. Sappington moved from Florida to Richmond, Virginia in July 2002, where he opened his first two practices. In 2016, he moved to Waco, Texas and purchased the unfinished building that now houses the Waco Office. He, his wife, and his youngest daughter painstakingly completed and decorated the entire interior & exterior of the office space and opened the doors of Highlands Foot & Ankle in May 2017.

Member of American College of Foot and Ankle Surgeons