What is Pediatric Flatfoot?

Flatfoot is common in both children and adults. When this deformity occurs in children, it is referred to as “pediatric flatfoot,” a term that actually includes several types of flatfoot. Although there are differences between the various forms of flatfoot, they all share one characteristic — partial or total collapse of the arch.

Most children with flatfoot have no symptoms, but some children have one or more symptoms. When symptoms do occur, they vary according to the type of flatfoot. Some signs and symptoms may include:

Flatfoot can be apparent at birth or it may not show up until years later, depending on the type of flatfoot. Some forms of flatfoot occur in one foot only, while others may affect both feet.

Symptomatic flatfoot is further described as being either flexible or rigid. “Flexible“ means that the foot is flat when standing (weight- bearing), but the arch returns when not standing. “Rigid” means the

arch is always stiff and flat, whether standing on the foot or not.

Several types of flatfoot are categorized as rigid. The most common are:

In diagnosing flatfoot, the foot and ankle surgeon examines the foot and observes how it looks when the child stands and sits. The surgeon also observes how the child walks and evaluates the range of motion of the foot. Because flatfoot is sometimes related to problems in the leg, the surgeon may also examine the knee and hip.

X-rays are often taken to deter- mine the severity of the deformity. Sometimes an MRI study, CT scan, and blood tests are ordered. 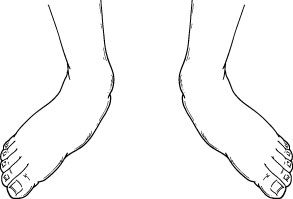 If a child’s flatfoot is asymptomatic, treatment is often not required. Instead, the condition will be observed and re-evaluated periodically by the foot and ankle surgeon. Custom orthotic devices may be considered for some cases of asymptomatic flatfoot.

In symptomatic pediatric flatfoot, treatment is required. The foot and ankle surgeon may select one or more approaches, depending on the child’s particular case. Some examples of non-surgical options include:

When Is Surgery Needed?

In some cases, surgery is necessary to relieve the symptoms and improve foot function. Foot and ankle surgeons perform a variety of techniques to treat the different types of pediatric flatfoot. The surgical procedure or combination of procedures selected for your child will depend on his or her particular type of flatfoot and degree of deformity.